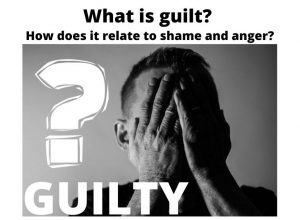 The difference between guilt, shame and anger, the pleasure of being a responsible adult
and 3 Things to remind yourself of, when you feel guilty or ‘bad’.

So you feel guilty? That’s great.

Feeling guilt is a sign that you have working conscience. It is a response to witnessing suffering. When we see starving children, refugees and the homeless and we feel guilty this motivates us to help and to do more. It is certainly an uncomfortable feeling and this means we are likely to respond to it and deal with it.

If you are ‘found guilty’ of a crime in court, it means that you are considered responsible for the crime. Children are not found responsible for legal crimes under the age of 10 [1]  in the UK. Being responsible/guilty is a privilege that comes with maturity.

How can guilt malfunction and go wrong?

Guilt is problematic when 1) appropriate guilt is not felt; 2) when we can’t tolerate healthy guilt; 3) when guilt is deflected from, by anger at the person who has been wronged; 4) when an apology and reparation don’t relieve a person’s guilt; 5) when the person is considered the wrong thing rather than the action they are responsible for.

(1) If a person does not feel guilt they are a sociopath. People who cannot be wrong and won’t apologise because they see no need, will not suffer from guilt. Never waste time trying to persuade them to feel guilt. They don’t feel appropriate guilt. Alternatively, you might feel inappropriate guilt, for example, some people who are the victims of injury can feel guilt about being abused. If you are stuck with this type of guilt it can help to imagine whether you would blame your best friend for being beaten up by her boyfriend or your own child for being exploited by a paedophile.

(2) Sometimes we say ‘no’, sometimes we can’t help, sometimes we have to help one person and not another (a classic philosophical and moral question) or we choose not to that day for our own reasons. This is part of life and it is normal to feel guilty even if we have a reason for our behaviour. Part of deciding not to help involves a resilience and an ability to feel guilty but not react compulsively, angrily or to be paralysed by it.

(3) If a person cannot handle the feeling of guilt they may become angry with the vulnerable person/people and think that the other deserves to suffer. In my opinion we see this when people become angry at desperate refugees for needing shelter or hungry people for being poor. This anger might indicate anti-social / sociopathic tendencies; it may be to do with a lack of maturity in how to understand, process and tolerate guilt adequately (emotional illiteracy) or it may be to do with a common mix up of shame with guilt (more on that in a minute).

(4) If apology and reparation don’t relieve the guilt a person might be experiencing pathological guilt and may be helped by working with a therapist. Let’s say you use my favourite tea cup when I have asked that you don’t, and then you break it. You would feel guilty and I might feel sad, betrayed or angry. Your guilt would motivate you to apologise to me and take responsibility in order to mend our trust and relationship, and it would drive you to repair or replace the cup. Then your guilt is assuaged and both of us move on. This is called apology and reparation and should be anyone’s first course of action if they feel guilty. If you can’t apologise directly to someone you might make a donation to a charity or make amends to assure no one else is injured by your mistake. You might decide to drive more carefully or to write a note on your calendar for everyone’s birthday if you scrape the car or miss a birthday, for example. I often say to clients, “OK, so you did this wrong. How long a sentence would you think that deserves?” Often a person has given themselves a life sentence for a ‘crime’ that doesn’t merit a life sentence. So working through it with a therapist can help devise a punishment or reparation that fits. If this doesn’t resolve guilt it is likely that there is much work to be done on shame (see below).

(5) Have you done something wrong or are YOU intrinsically wrong? Let’s say some one asks you to help them cross the road but you are too busy and you say, no. You would naturally feel guilty, there would be a malfunction of your emotions if you didn’t. But if you feel you are a defective, awful, heartless person you aren’t feeling the normal conflict of guilt. You are feeling shame. Your actions are not questionable, your whole being is! Shame is a huge therapy issue and there are many books on the subject.

As I wrote above, there is no point trying to persuade a sociopath to feel guilty or to be motivated to help suffering.

Should we try and persuade others to help relieve suffering? The advertising for charities shows suffering – a sad old donkey, a starving child, a mother with a baby in her arms. They show or educate people about the suffering in order to motivate them to help.

Guilt tripping implies that the vulnerable person or people are trying to manipulate other people to help them by revealing their suffering and that they are wrong to do so. When the label guilt tripping is put on a person it assumes that the person is making another person feel bad for their own ends.

Either the ‘guilt tripper’ is giving context or education in order to harness your conscience (which will feel guilty) to help you take appropriate action and help them, or they are attacking you as privileged and heartless people in which case they are not guilting you, they are shaming you. When I book tickets for a concert, I usually say, “I am a blue badge holder, do you have concessions for me or a carer?” I won’t get the concession if I don’t ask and if I don’t give them the information regarding my needs and vulnerabilities. They are legally bound to have some policy of some sorts, so there is an intention on my part to give the information in order to get something based on both a moral and legal premise. Is this a guilt trip because I cite information that will hook the response I desire?

Let’s call it what it is:
It is either a request with supporting and maybe persuasive information or it is shaming.

I do not think we should use the term guilt tripping. Let’s call it what it is. It is either a request with supporting and maybe persuasive information or it is shaming. If it is shaming, the language that will indicate this is along the lines of, “It’s alright for you, in your ivory tower, not giving a shit about people less fortunate than yourself.” – that is shaming, that indicates the person is flawed, not their behaviour.

If on the other hand the language is, “I have not eaten for three days, I need help to clean and dress myself, I don’t know who to ask or if anyone will help me,” then the person is giving you information / education about their experience and distress and certainly they may hope that you are someone who has conscience (capacity for guilt) and therefore might be motivated to help. When you use the phrase guilt trip you begin to shame them. You imply characteristics such as deceit, manipulation, power issues and controlling behaviours. You might say, “Well they don’t need to cry or look upset when they ask because that is just a guilt trip!”. However your behaviour has just become shaming when you say that.

Maybe their upset is genuine and maybe you need to learn to tolerate a visit from guilt rather than getting angry about ‘guilt trips’.

Learn to tolerate a visit from guilt

Fear of guilt indicates that you are afraid of your boundaries not holding, afraid of being controlled by guilt. The person who you feel most guilty around may not be designing to make you feel bad or controlled, they may have a different fear – maybe of loss or loneliness.

Three things to remind yourself of when you feel guilty:

1. Yay! I’m not a sociopath.
My natural conscience and compassion are both in working order. Part of my response is to learn to feel guilty and learn to bear it as I am part of suffering humanity.

3. I am more likely to feel guilty when faced with someone’s vulnerability and need.
I can consider whether the other person’s motive is designed to make me feel bad or simply a (maybe clumsy) request for help. Evoking compassion, for myself and others, in the face of need will always help. I can still say ‘yes’ or ‘no’ to requests but with compassion of another’s suffering. Getting angry with their need adds to their suffering and my own guilt.I am bigger and stronger than the person who needs help now. I’m an ok person with the power to choose. I can respond with compassion (this does not mean doing what the other person wants).

I can be compassionate.

[1] Which I disagree with given that their brains are not mature.

This site uses Akismet to reduce spam. Learn how your comment data is processed.